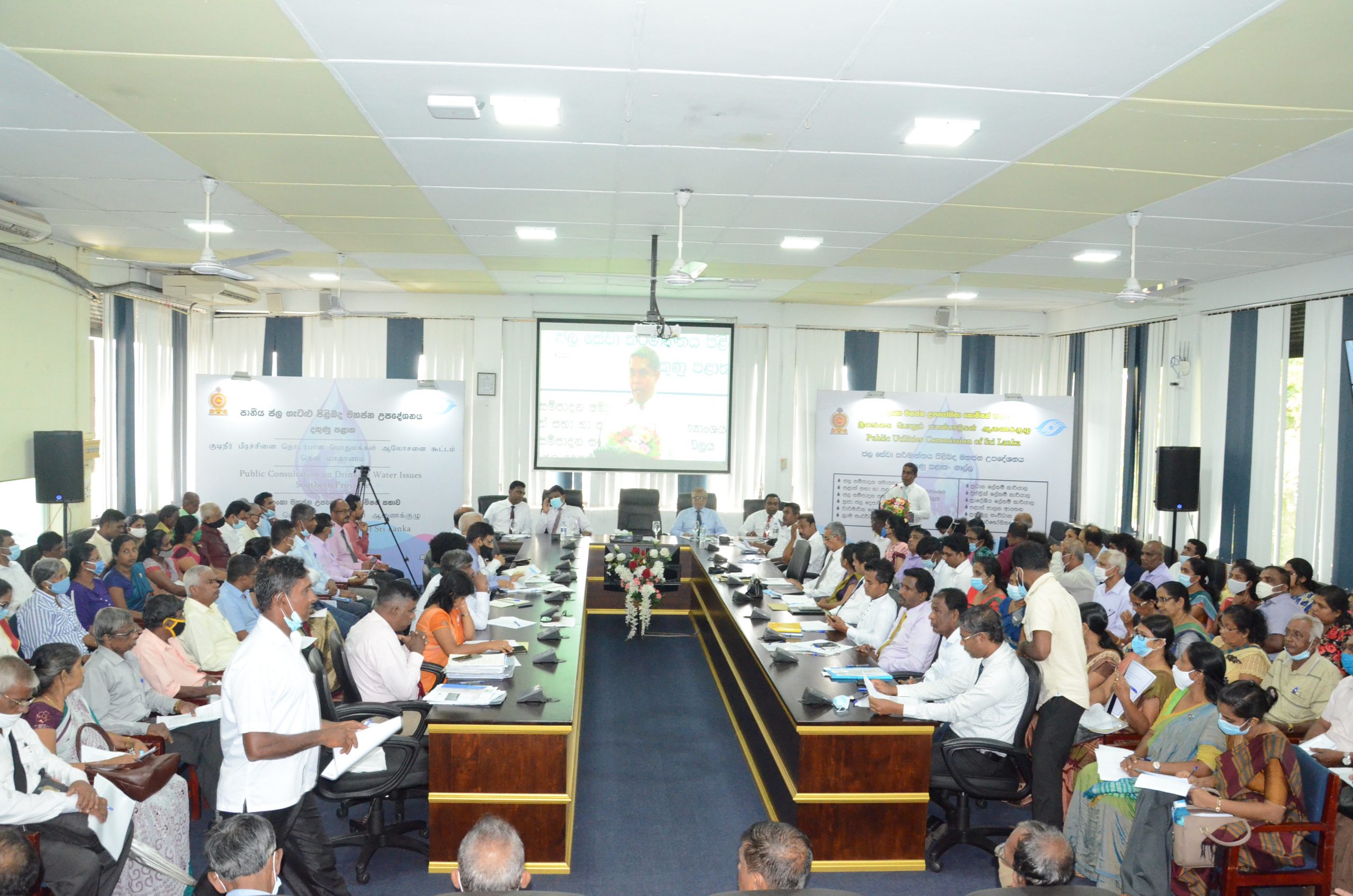 The Public Utilities Commission of Sri Lanka (PUCSL), the electricity sector regulator and the designated regulator for water services successfully conducted the public consultation on water issues and solution in the Southern Province last week (24/ 09/2020) with the participation of more than 200 water consumers, government officials and industry-related stakeholders submitting more than 40 drinking water issues in Southern Province and solutions for the issues.

The PUCSL plans to visit every province in Sri Lanka to listen to the stakeholders on drinking water issues and the solutions to recommend policy advice to the Government of Sri Lanka. The first discussion held in North Western Province in early September 2020.

‘While nearly 70% of the world is covered by water, only about 3% of it is drinkable. In Sri Lanka, the need for water is rising rapidly. So, our objective is to address all the issues submits by the public and other stakeholders in these consultation process that we conduct island-wide, through a policy recommendation to the Government.’ Prof. Kithsiri Liyanage, Chairman of Public Utilities Commission of Sri Lanka said at the Southern Province discussion.

Drinking water in Sri Lanka currently supplied by the National Water Services and Drainage Board, certain local authorities and by community-based organizations. According to Demographic and Health Survey by the Department of Census and Statistics in 2017, the pipe-borne water (mainline) coverage is 35.2 per cent while protected well covers 29.1 per cent, semi-protected well covers 11.2 per cent, tube well covers 3.6 per cent, rural water supply project covers 8.1 per cent, bottled water covers 3.1 per cent and non-improved source water covers 9.7 per cent of drinking water in Sri Lanka.

The consultation paper by PUCSL named ‘Provincial Council cooperation for a coordinated, national approach to provide safe and affordable drinking water for all by 2030’ says that it is necessary to ensure coordination among multiple suppliers and entities such as the Department of Irrigation which controls water resources to meet the national policy objectives.  It is necessary to create the proper conditions for investment in modern water services and their proper maintenance and distribution. Quality must be raised and gaps in service provision closed.

‘The drinking water problem in Galle District is very serious. It supplies only 1/3 of the drinking water requirement of the city of Galle. There is no way to provide new water connections too. That is why this dialogue is very important.’

‘We are working on providing more pipe-borne water connections for the district while carrying out augmentation for current projects.’ – A C M Nafeel, Additional Secretary (Development) of the Ministry of Water Supply said.

‘People do trust the pipe-borne water provided by NWS&DB. Therefore, we need to make an extra effort to expand the coverage. I believe we have enough water resources within the district (Galle) to cater to our needs. But managing those resources efficiently to supply for our needs is an issue. – Nimal Indrajith, Deputy Chief Secretary of Southern Province said at the discussion of Southern Province.

Local Government Commissioner of Southern Province, Senaka Palliyaguruge said that there are several reasons to aggravate the drinking water problem in the southern province and an integrated solution must be provided to address it.

‘Lack of sanitation facilities, Disposal of sewerage in water catchment areas due to lack of proper system, Disposal of waste in water catchment areas due to non-availability of a proper system, insufficient financial allocation from local authorities to develop the system, lack of identification of an adequate and socially accountable auditing system to monitor the investment and development are few main reasons to aggravate the drinking water problem in the southern province.’ Palliyaguruge said.

PUCSL has so far received more than 200 stakeholder submissions on the drinking water issues and solutions to the issues. The next drinking water discussions are planned in the central province and eastern province in October 2020.